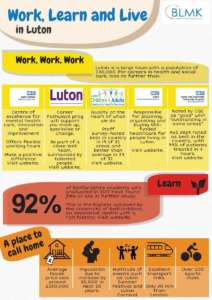 Luton is a large town, borough and unitary authority area within Bedfordshire and is situated 30 miles (50 km) north-northwest of London. The town has a population of 218,350. Luton has excellent transport links via the motorway network and the National Rail system. Journey times between London and Luton is approximately 20 minutes on the train – twice as fast as a taxi. London Luton Airport opened in 1938 and is one of the major feeder airports for London and the southeast.

In addition, Luton is served by a number of bus operators and has links to Central Bedfordshire, Bedford and Milton Keynes.

Throughout the year, a multitude of events and entertainment are held within Luton, creating a fun, friendly and vibrant atmosphere for all the family. The diverse range of events includes St. Patrick’s Day celebrations, the annual St George’s Day festivities, celebrations for Eid and Diwali commemorations.

Another highlight is the week-long Luton Summer Festival, which takes place in the first two weeks of August, with St George’s Square hosting everything from Greek dancing and world music to performance, poetry, food markets and children’s events.

The Luton Carnival, which has traditionally been held on the Whitsun May bank holiday, is the largest one-day carnival in Europe.

The Hat Factory, a first-class, cutting-edge arts venue, features innovative and highly creative work, such as contemporary drama by leading playwrights and producers from across the region and the UK, as well as the latest music from local and international artists.

Luton is home to League Two team Luton Town Football Club, whose history includes several spells in the top flight of the English league as well as a Football League Cup triumph in 1988. They play at Kenilworth Road stadium, which has been their home since 1905.

While 30 sports groups are registered with Luton Borough Council, it is estimated that there are over 200 different sports clubs in Luton.

There have recently been £4 billion of improvements in and around Luton. The dramatic redevelopment of Luton town centre, with stunning changes to public areas as well as the centre’s skyline, has ensured that more businesses than ever before are choosing to call Luton town centre their home.

A wealth of restaurants, bars, cafes and clubs, along with a packed line-up of entertainment, events and nightlife, has also made Luton a popular destination of choice for a diverse range of visitors, whether they choose to shop, be entertained, do business or celebrate.

In 2015 businesses in Luton town centre voted yes to becoming a Business Improvement District (BID), ensuring the future of the town centre is even brighter, with a five year plan of investment that will build on its great visitor experience and vibrant offering.